What Is The Difference Between Automation And Robotics? 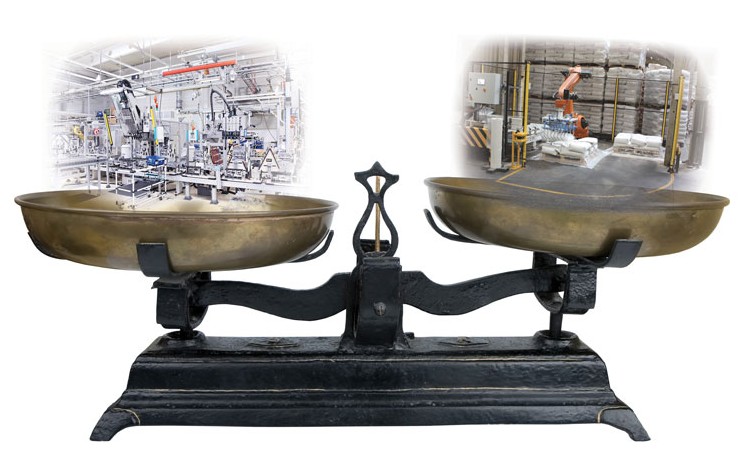 This is a question that is regularly asked by those looking to introduce some form of automation into their production process.

Let’s look at the different applications…

Robotics consists of a branch of technology that predominantly deals with the design, construction and operation of robots. An industrial robot is typically a standard machine controlled by an internal or external computer that is able to carry out a complex series of movements automatically. There are a wide range of robots available; from basic robot arms through to completely autonomous vehicle mounted robots.  Robots are often equipped with audio, visual and tactile sensors.  Whilst a standard robot usually follows a pre-determined program, collaborative robots have force sensing built in and as a result are able to follow a person’s movements and work collaboratively with them.

Robots today perform a variety of jobs within factories such as:

The main advantage of robots is their adaptability and flexibility.  They are also a known component when designing an automated system with mixed products/requirements. They can also be a very cheap way to automate multiple tasks with a lot of variables that would otherwise need a very specialist bespoke automated system.

Bespoke automation is the term typically used where there is a stable and predictable production processes that needs specialist automation designed specifically to perform that process.

The main advantage of bespoke automation is that it can be tailored exactly to a process in the most efficient way. This can often result in faster production speeds, and more effective solutions for repeat tasks with little variation in products or requirements.

Robotics or Bespoke Automation – Which do I need?

Now you understand more about robotics and automation, but you may still be wondering which you need! Maybe you need both? This depends entirely on the process you are wishing to automate. Robotics or bespoke automation may be used, but as they are both developed in different ways, it may often be necessary to use both to enable the optimum automation solution to be created.

To summarise, the main difference between robotics and automation is that robots are a piece of equipment that can perform a variety of tasks with programming, whilst bespoke automation is a term that is used for special purpose machines or systems that are designed to perform a specific task.

But in short Robotics are just one of many methods of Automation!

This entry was posted in Company news, Granta Updates and tagged automation. Bookmark the permalink.